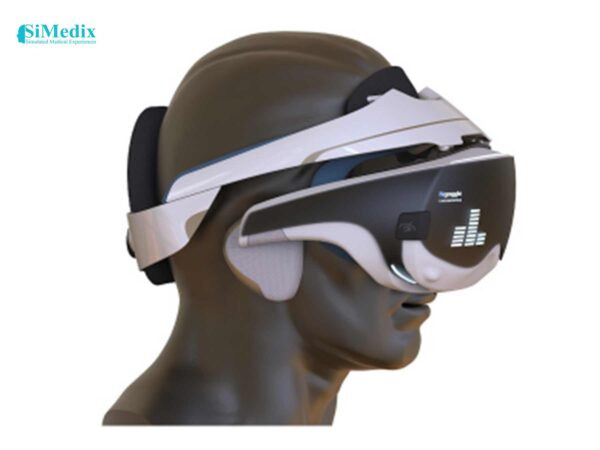 A wearable brain-based device called NGoggle that incorporates virtual reality could help improve glaucoma diagnosis and prevent vision loss. Duke University researchers funded by the National Eye Institute (NEI) have launched a clinical study testing the device in hopes that it could decrease the burden of glaucoma, a major cause of blindness in the U.S.
The device consists of head-mounted virtual reality goggles that use light to stimulate targeted areas in patient’s visual field. NGoggle’s portability means that it could potentially be used in variety of environments: in eye care provider’s office, a community center, or in a person’s home.
“Glaucoma treatment can only slow or halt disease progression, so early detection is key to preventing irreversible glaucoma-related vision loss. Timing is everything,” said Jerome Wujek, Ph.D., an NEI research resources officer who oversees grants to help small businesses bring biomedical technologies to the market. Glaucoma leads to blindness by damaging the eye’s optic nerve – the bundle of more than a million nerve fibers that connects the eye to the brain. The disease poses a major challenge because its initial impact on vision is imperceptible, starting with subtle deficits in peripheral (side) vision. As it progresses, these deficits grow worse, eventually leading to tunnel vision and irreversible blindness.
“Current methods for glaucoma screening and monitoring are relatively primitive,” said Felipe Medeiros, M.D., Ph.D., a study investigator, a cofounder of NGoggle, Inc., and a professor of ophthalmology at Duke University School of Medicine. Standard screening tests measure pressure within the eye. Although elevated intraocular pressure is the main risk factor for glaucoma, not all cases of the disease are associated with high pressure. Screening for glaucoma based on single intraocular pressure measurements may fail to detect up to 80 percent of the patients with the disease, Medeiros said. “That’s because many people develop optic nerve damage from glaucoma at relatively low intraocular pressure levels. In addition, pressure fluctuates widely throughout the day and on different days, making it difficult to rely on a single measurement for diagnosis and screening. Importantly, many subjects may also have high intraocular pressure and never develop damage to the optic nerve.”
Eye care providers most commonly use standard automated perimetry (SAP) to monitor glaucoma progression. SAP requires patients to click a button when lights are randomly shown for a brief time in their peripheral vision. But reliability is a drawback. On average, seven years of annual testing would be needed to detect disease progression. Upping the test frequency to three times annually cuts the time to five years. “That may be an improvement, but there are tremendous difficulties in bringing patients to be tested in clinic several times a year. In the meantime, the opportunity for treatment to preserve vision diminishes considerably,” he said. 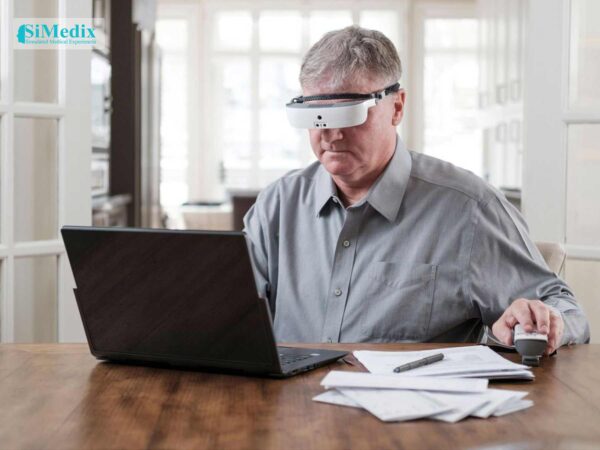 In contrast to SAP, the NGoggle objectively assesses peripheral loss of vision without requiring subjective input from the patient. NGoggle gauges brain activity in response to signals received from the eyes. Diminished activity may indicate functional loss from glaucoma. The virtual reality goggles are integrated with wireless electroencephalography (EEG), a series of electrodes that adhere to the scalp to measure brain activity. Within a few minutes, the NGoggle algorithm captures and analyzes enough data to report how well each eye communicates with the brain across the patient’s field of vision.
The device’s virtual reality capabilities can be greatly leveraged, Medeiros said. People could be tested for glaucoma as they play a VR-based video game or explore a virtual art gallery. “The possibilities are endless for making it an engaging experience, which would go a long way toward ensuring that people use it and receive the treatment they need,” he said.
In a partnership with Duke University, a study is being conducted to validate the diagnostic accuracy and reproducibility of the device. In addition to comparing NGoggle to SAP, they will look at how well NGoggle discriminates among different stages of disease by comparing its assessments of the neural damage in glaucoma with standard imaging techniques such as optical coherence tomography. The investigators also plan to conduct longitudinal investigations in which patients will be followed over time to validate the ability of the device to detect disease progression. Results will inform an application to the U.S. Food and Drug Administration to market the device.
NEI leads the federal government’s research on the visual system and eye diseases. NEI supports basic and clinical science programs to develop sightsaving treatments and address special needs of people with vision loss. About the National Institutes of Health (NIH): NIH, the nation’s medical research agency, includes 27 Institutes and Centers and is a component of the U.S. Department of Health and Human Services. NIH is the primary federal agency conducting and supporting basic, clinical, and translational medical research, and is investigating the causes, treatments, and cures for both common and rare diseases.