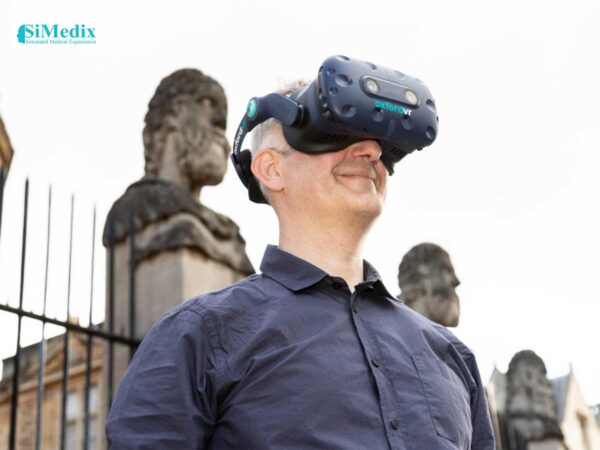 Oxford VR has been recognised at the Immersive Perspective Awards 2018, hosted by Virtual Perceptions, winning the Immersive Healthcare of the Year award. The Awards celebrate the best of virtual reality, augmented reality and mixed reality. This follows a period of unprecedented growth for the Oxford University spin-out business and a highly successful launch of its research into the use of immersive VR technology for mental health.

The accolade comes on the back of research led by Oxford VR’s Chief Clinical Officer, Daniel Freeman, into the use of VR to deliver psychological therapy via a computer-generated virtual coach. The results of the research, which focused on fear of heights, were published in the Lancet Psychiatry. The research proved Oxford VR’s therapy has the potential to transform mental health for millions by combining state-of-the-art immersive technology with world-class, clinically validated science.

“Mental health is a growing concern in our society,” said Barnaby Perks, CEO of Oxford VR. “Around one in four of us will experience a clinical psychological disorder at some point in our lives. While we don’t lack high-quality, evidence-based psychological treatments for many mental health problems, we are short of the skilled clinicians who can effectively deliver them.

“VR therapy has been used in the past to treat certain mental health conditions, specifically phobias, but it has always required a therapist with the appropriate skills and knowledge to guide the patient through the treatment. With access to therapists limited, there are delays in treatment. However, Oxford VR has now broken new ground by proving the effective use of automated VR therapy to treat mental health disorders. This treatment will be faster and significantly cheaper to deploy, and will complement existing traditional clinical therapies excellently,” Barnaby explained.

“Our fear of heights intervention has shown the potential of automated VR treatment, and we are now developing interventions for a wide range of significant mental health problems including psychosis, social anxiety, OCD, depression and addiction.” he added.