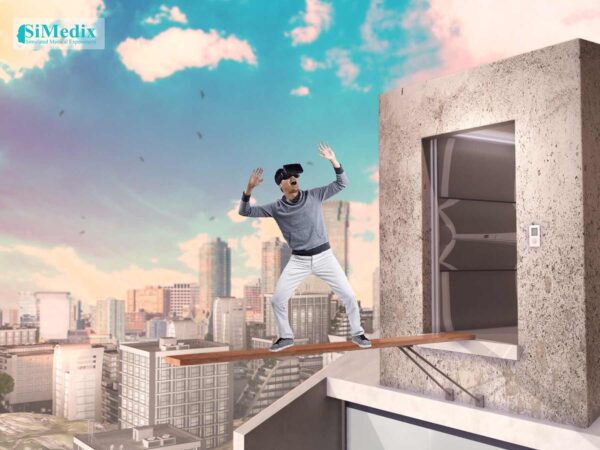 Virtual reality treatment for acrophobia: The affected person wears a head mounted display (HMD) complete with a tracking system and headphones. They are shown a series of images as part of a virtual environment which they interact with. For example, the HMD will display a virtual balcony or another similar situation in which the person is placed at a height and appears to be looking down towards the ground.
The tracking system within the headset monitors the movement and position of the person’s head as they look around their virtual environment, e.g. look downwards. As they tilt their head the images change to reflect the change in perception which also adds a sense of realism.

The therapist/counsellor will monitor the person’s physical reactions by means of bio-feedback, such as heart rate, skin conductivity and respiration. This provides data andhow the person is reacting to the source of their phobia and the level of stress andanxiety. The therapist will recommend that the sufferer undergoes this treatment several times sothat they become familiar with heights and how to deal with them. They will learn how tochange their thoughts and behaviours so that they are better placed to deal withsituations such as this.